….Iiiiiiiiii have not actually read Moby Dick. I don’t know if I plan to. I did read the Classics Illustrated comic version of it when I was about fourteen; does that count? And I will grant that it has one of the best opening lines in literature, which thousands of teenagers in the American education system have been forced to analyse:

Plus it inspired the whole theme from that film where Khan Noonien Singh simply refused to let bygones be bygones:

Moby Dick isn’t as big over here as it is in the USA, so as far as I can remember Dad never pressed us to read this book. I fear he may have thought we’d find it boring. I fear he might have been right. I may just read the book and report back.

I do remember, however, one time when he was describing clam chowder to his two young daughters, emphasising how wonderful and delicious this type of soup could be. We, as nonbelievers in seafood at this point (although we had a weakness for buttered crabs’ claws) were not convinced.

In an effort to get his point across, he vanished into his study and returned with this book, to read out a passage from a chapter that was literally called Chowder, when Ishmael and Queequeg the harpooner are trying to find something for dinner:

And so it turned out; Mr. Hosea Hussey being from home, but leaving Mrs. Hussey entirely competent to attend to all his affairs. Upon making known our desires for a supper and a bed, Mrs. Hussey, postponing further scolding for the present, ushered us into a little room, and seating us at a table spread with the relics of a recently concluded repast, turned round to us and said – “Clam or Cod?”

“What’s that about Cods, ma’am?” said I, with much politeness.

“Clam or Cod?” she repeated.

“A clam for supper? a cold clam; is that what you mean, Mrs. Hussey?” says I; “but that’s a rather cold and clammy reception in the winter time, ain’t it, Mrs Hussey?”

But being in a great hurry to resume scolding the man in the purple shirt, who was waiting for it in the entry, and seeming to hear nothing but the word “clam,” Mrs. Hussey hurried towards an open door leading to the kitchen, and bawling out “clam for two,” disappeared.

“Queequeg,” said I, “do you think that we can make out a supper for us both on one clam?”

However, a warm savory steam from the kitchen served to belie the apparently cheerless prospect before us. But when that smoking chowder came in, the mystery was delightfully explained. Oh, sweet friends! hearken to me. It was made of small juicy clams, scarcely bigger than hazel nuts, mixed with pounded ship biscuit, and salted pork cut up into little flakes; the whole enriched with butter, and plentifully seasoned with pepper and salt. Our appetites being sharpened by the frosty voyage, and in particular, Queequeg seeing his favorite fishing food before him, and the chowder being surpassingly excellent, we despatched it with great expedition: when leaning back a moment and bethinking me of Mrs. Hussey’s clam and cod announcement, I thought I would try a little experiment. Stepping to the kitchen door, I uttered the word “cod” with great emphasis, and resumed my seat. In a few moments the savory steam came forth again, but with a different flavor, and in good time a fine cod- chowder was placed before us.

Not going to lie; listening to this section, especially the long list of what actually went into the chowder, made me feel hungry. When I saw clam chowder on a menu a little time later, while we were on holiday – I can’t recall where – I might have thought of this passage, and asked for it, just to see if it was as good as Melville described. And, for all he didn’t talk much about Moby Dick, Dad liked this book. He liked it enough to quote from it, anyway. I remember the sheer enthusiasm he put into reading this passage to us, almost to the point of lip-smacking when listing off the ingredients, and the pleasure the characters took from eating it.

Although, really, you were never going to get an unenthusiastic reading from Dad at any point. He loved to recite. 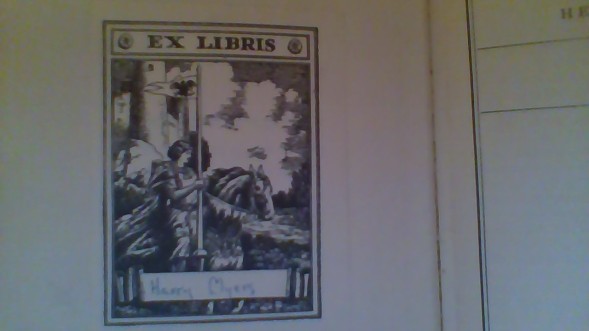 (Obviously the book belonged to someone else at some point. Did Dad get it from a secondhand shop? Was it a hand me down? What still hurts after nearly three years is that I can’t ask him. I’ll never be able to ask him anything again.)