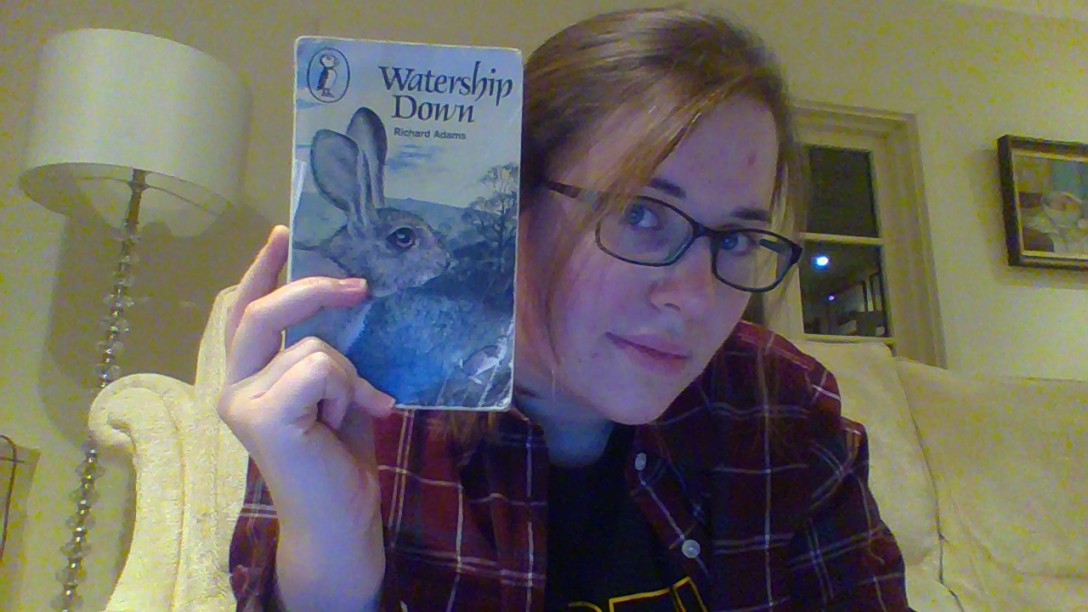 “All the world will be your enemy, Prince with a Thousand Enemies, and whenever they catch you, they will kill you. But first they must catch you, digger, listener, runner, prince with the swift warning. Be cunning and full of tricks and your people shall never be destroyed.”

I don’t remember a specific moment when Dad first introduced us to Watership Down by Richard Adams; there was just a time before we started reading it, and a time afterwards.We must have first read it at some point either before or round about 1999, because we semi-avidly watched the first season of the animated series which had started that year, and compared it with the plot of the book.

When first starting this story, I’m pretty sure I thought that it was going to be like The Animals of Farthing Wood (the cartoon; we never got around to reading the books – wait, there were books???) or possibly Beatrix Potter’s menagerie; fairly anthropomorphic animals who must band together and be wary of the terrible humans.

My expectations were both fulfilled and exceeded.

How to describe this book? Words really do fail me. Handily for me in this busy season, the 1974 Puffin edition provides this excellent and informative preface!

The characters in this book – such as Hazel the Leader, Bigwig the Warrior, Fiver the Prophet, Blackberry the Wise, Dandelion the Swift/Storyteller, Pipkin the…Small? – strive to have as little to do with humans as is lapinely possible. The reality of being a small fluffy mammal – in a world where you are either considered a tasty snack or a nuisance that needs to be dealt with; ‘all the world will be your enemy’ remember? – is in full whack. These rabbits can’t count past four. They think cars are living creatures, roads are solid black rivers and a train is a messenger from Frith, the sun/their god. They’re barely able to communicate with other hedgerow species, although there are exceptions like hares, Keehar the black-headed gull, and a mouse they save from a hawk. They’re baffled by things like wood being able to float on water, and can’t even comprehend the thought of the ocean and lands on the other side of it. They have fierce bonds of companionship but absolutely no concept of romantic love.

In fact, the more human-like certain rabbits are, the more freakish and sinister they appear to both the protagonists and the readers. The rabbits at one warren dance in greeting to each other, push stones into the walls of burrows to create ‘art’ and recite poetry. In something like Redwall that’d be standard, but in this novel it’s just as bizarre as it would be to see a rabbit do that in real life. There’s an underlying theme of rot and strangulation that’s driving them to behave like this, totally antithetical to how rabbits should live in the wild.

For which there is a reason. Oh, yes.

Even worse is the totalitarian police state of Efrafa. If you’re wondering how cute fluffy bunnies can create a police state, trust me, it’s entirely possible and horribly plausible. Also ironic in that, trying desperately to protect his warren from being discovered by mankind, General Woundwort comes up with methods of control and intimidation that are alien to rabbits but so very familiar to us.  “You can’t imagine it unless you’ve been there,” one traumatised rabbit says. Safety and security at the expense of personal freedom? I imagine it isn’t too hard for we humans to imagine something like Efrafa.

On top of the stark realities of realistic hedgerow life coupled with unnatural, human-like practises, I also got a tale more like something out of Greek or Norse mythology than Farthingwood. Critics have described the plot of this book as the fall of Troy, if Cassandra had been believed and gathered followers to flee the destruction brought by the Greeks. From the get-go this is both a story and an epic.

These real rabbits have a mythology as engaging as any real world pantheon, a belief system of sorts. They acknowledge the possible existance of the gift/curse (delete as you feel appropriate) of prophecy. They have a dark figure somewhere between the grim reaper and a god of the afterlife, the Black Rabbit of Inlé. One of the scariest parts of the book is when the rabbits believe the Black Rabbit has come for one of them:

“That’s no cat!” said Bigwig, his lips drawn back in a stiffened, unnatural grimace, “That’s no cat! Don’t you know what it is? Your mother-” He broke off. Then he said, very low, “Your mother told you, didn’t she?”

Bigwig stood up. His back was arched and his head nodded on his stiffened neck.

“The Black Rabbit of Inlé,” he whispered, “What else-in a place like this?”

“Don’t talk like that!” said Hazel. He could feel himself trembling, and braced his legs against the sides of the narrow cut.

Suddenly the noise sounded again, nearer: and now there could be no mistake. What they heard was the voice of a rabbit, but changed out of all recognition. It might have come from the cold spaces of the dark sky outside, so unearthly and desolate was the sound. At first there was only a wailing. Then, distinct and beyond mistaking, they heard-they all heard-words.

Dandelion whimpered. Bigwig was scuffling into the ground.

“Be quiet!” said Hazel. “And stop kicking that earth over me! I want to listen,”

At that moment, quite distinctly, the voice cried, “Thlayli! O Thlayli!”

At this, all four rabbits felt the trance of utter panic. They grew rigid. Then Bigwig, his eyes set in a fixed, glazed stare, began to jerk his way up the ditch toward the opening. “You have to go,” he muttered, so thickly that Hazel could hardly catch the words. “You have to go when he calls you.”

The rabbits have the human custom of storytelling, but unlike art in the walls or police states, this type of creation feels completely natural and organic. They recite tales of their archetypal folk hero El-Ahrairah, but also add their own flourishes and gradually incorporate bits and pieces of their own epic journey into the traditions of the stories. Reading these tales and experiencing them along with their four-footed listeners, I could well imagine the same sort of stories being told by Vikings raiders or explorers staving off the cold and dark of the night, or Greek storytellers explaining fables for how the world works.

For crying out loud, the very first epigraph you get when you open the book – also my first experience with an epigraph, I do believe – is an extract from Aeschylus’s Agamemnon:

CHORUS: Why do you cry out thus, unless at some vision of horror?
CASSANDRA: The house reeks of death and dripping blood.
CHORUS: How so? ‘Tis simply the odour of the altar sacrifice.
CASSANDRA: The stench is like a breath from the tomb.

This quote actually became a great source of fascination for both me and Dad. I used it, again in epigraph form, in a piece of fan-fiction. Dad liked it so much that he took some effort to track down the specific translation it was from – not an easy task, given Adams didn’t mention the translator’s name. When he finally discovered the correct version of the quotation, who should the translator be but poet and playwright Robert Browning?!

This is an incredibly well loved book; the cover is only staying on with the help of some sticky tape. Like The Day of the Triffids, this book was always kept in a public area of the house where we could easily get to it, give or take standing on a chair. We commented on the story and how good it was more than actually reading it to each other. But I do remember often finding one particular passage to read to my long-suffering parents again and again, as if they’d never heard it before, trying to get the right sense of weight, sorrow and accusation in:

“We followed the river down into a big wood; and that night, while we were still in the wood, Toadflax died. He was clear-headed for a short time before and I remember something he said. Bluebell had been saying that he knew the humans hated us for raiding their crops and gardens and Toadflax answered, “That wasn’t why they destroyed the warren. It was just because we were in their way. They killed us to suit themselves.”

It’s the first book I can remember specifically reading certain passages so often that I had them memorised. I loved the shape of Adams’ words so much. The man was an utter genius.

The news of Richard’s Adams’ death on 24th December 2016 came, as of this writing, yesterday evening, 27th December 2016. The first thing I – and many other fans – could think of was go on Twitter, and mark this passing with the very words he created for his characters to use in such an event:

“My heart has joined the Thousand, for my friend stopped running today.”

The book’s official website noted his passing with a passage taken from the very end of Watership Down. I’ll sign off instead with the conclusion of the very first tale found in the book:

And every evening, when Frith has done his day’s work and lies calm and easy in the red sky, El-ahrairah and his children and his children’s children come out of their holes and feed and play in his sight, for they are his friends and he has promised them that they can never be destroyed.

5 thoughts on “Sorting through Dad’s hoard #11: Watership Down”