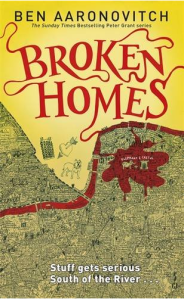 A mutilated body in Crawley. Another killer on the loose. The prime suspect is one Robert Weil; an associate of the twisted magician known as the Faceless Man? Or just a common or garden serial killer?

Before PC Peter Grant can get his head round the case a town planner going under a tube train and a stolen grimoire are adding to his case-load.

So far so London.

But then Peter gets word of something very odd happening in Elephant and Castle, on an housing estate designed by a nutter, built by charlatans and inhabited by the truly desperate.

Is there a connection?

And if there is, why oh why did it have to be South of the River?

Full of warmth, sly humour and a rich cornucopia of things you never knew about London, Aaronovitch’s series has swiftly added Grant’s magical London to Rebus’ Edinburgh and Morse’s Oxford as a destination of choice for those who love their crime with something a little extra.

London’s rivers are full of gods – or rather genius loci. There are Fair Folk living in the Underground System and ghosts haunting the streets who can definitely pack a punch. There are real cat girls – and worse things – in Soho, and vampires in Purley.

(Incidentally, that last section of blurb on the dust jacket of the first book was what inspired me to take it to the counter. I mean, vampires in my home suburb? HOT DAMN.)